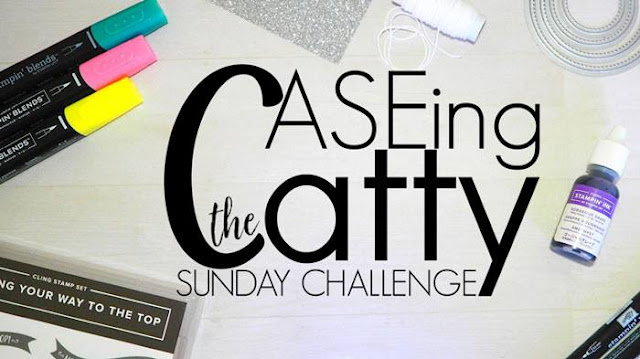 CASE a Die Project from either of the current catalogues: 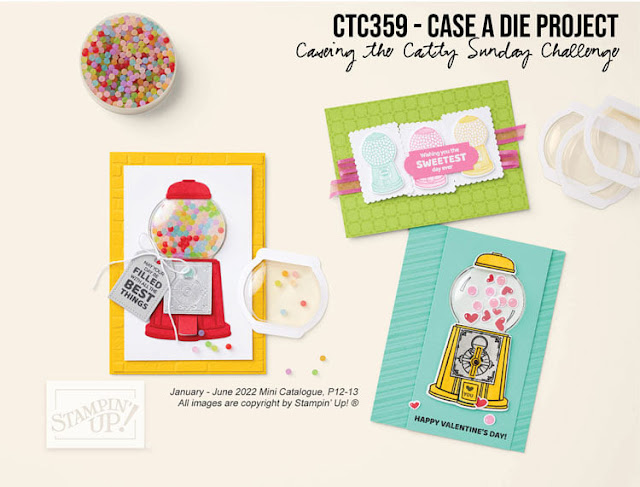 I've loosely used the card at the top of page 16 of the Mini Catalogue: 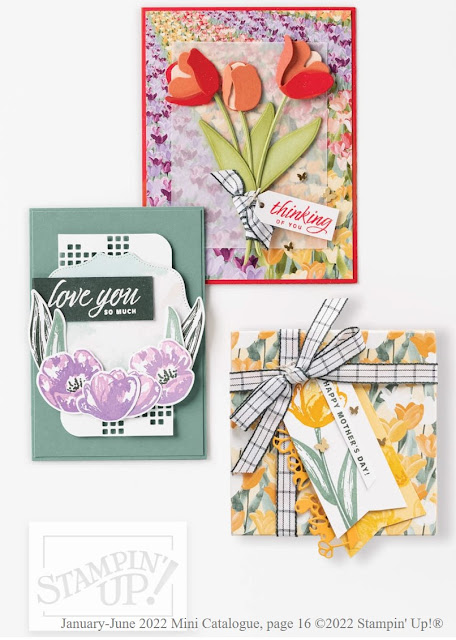 Loosely as in I saw red tulips and the need to make a special card for an 80th birthday for someone who likes the colour red. That's when I veered away from the original CASE card.

Using the Tulips Dies, I've diecut multiple pieces of tulip petals from Real Red cardstock and pieced them together in as many different ways as I could think of. Here's an idea of the pieces I used to make, some may be the same, but most of them are different, by folding one left over right and another right over left, or by using a wide insert, or a narrow insert or a couple of narrows. So many options: I've sponged edges and tops with Cherry Cobbler ink and a sponge then pieced a stem, using both thicknesses to each of the flowers. I've diecut multiple stems and leaves using Garden Green cardstock.

I've then created a Pop Up Box card using a piece of Basic Black cardstock, the full width of A4 by 6" in length. I chose two sheets of Hand-Penned DSP for the background and adhered them to the base card. I pieced the tulips to the black inserts before I stuck the inserts inside the box so I could fiddle with the placement. 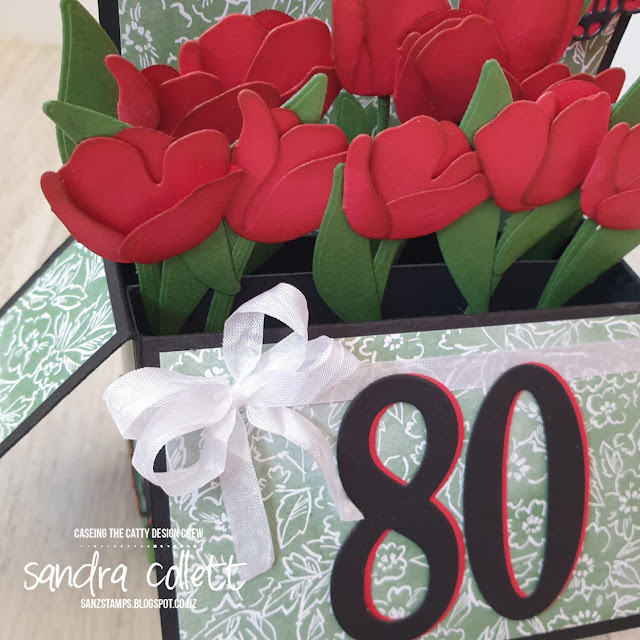 I've tied Whisper White Crinkled Seam Binding Ribbon around the front flap and added a double bow. I've used the (retired) Large Numbers for the Basic Black and Real Red numbers and adhered them together slightly offset then added these to the front flap. . 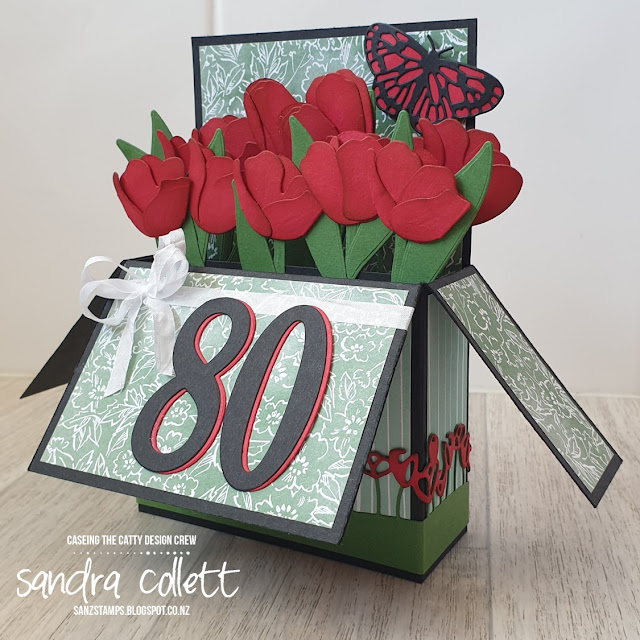 The Basic Black butterfly was cut with the Brilliant Wing dies and adhered over a piece of Real Red cardstock and fussy cut around as the co-ordinating blank die left a red border around the butterfly which I didn't want. I've popped that onto the card with Stampin' Dimensionals. 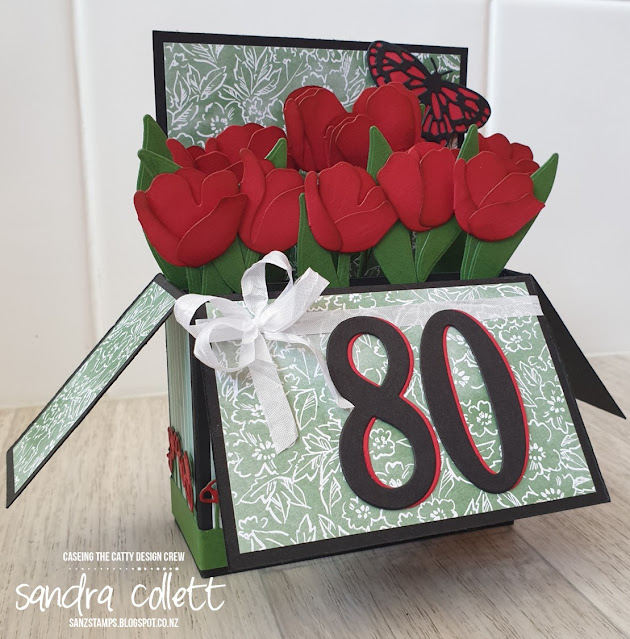 The edging was made using a strip of Garden Green cardstock A4 width and diecutting the edge then lining it up again and diecutting the rest of the width. I then adhered some Adhesive sheet to the back of a strip of A4 cardstock the same width and ran this through the same way. I then snipped off all the stems and sponged with Cherry Cobbler ink, removed the backing from the adhesive sheet and stuck my flowers onto their stems: 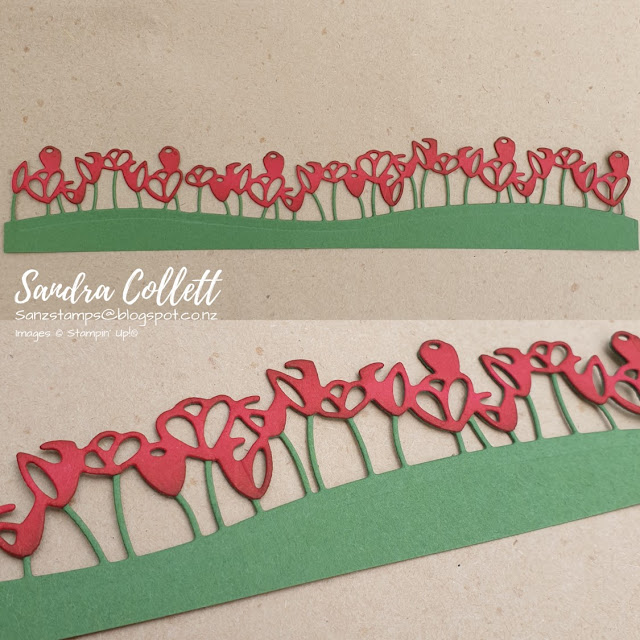 This strip was then attached to the lower edge of the card and wrapped around to the back where the ends are hidden by my greeting panel. 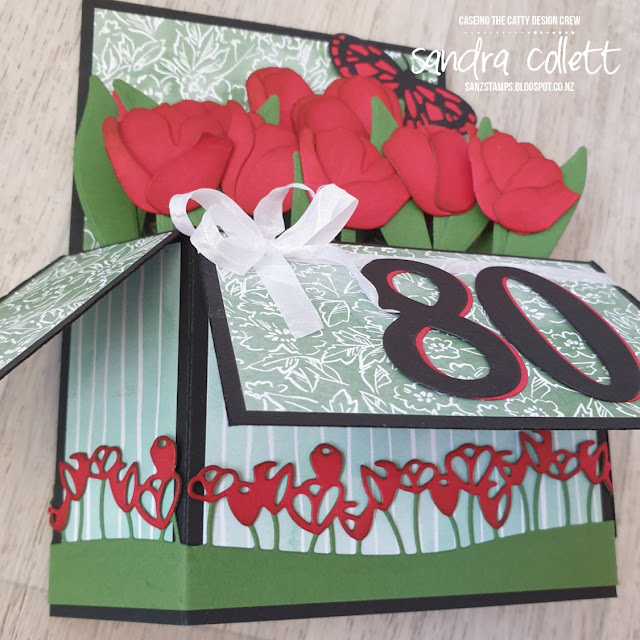 The Happiest of Birthdays was used for the greeting, stamped in Garden Green ink onto a panel of Basic White with another tulip added to finish. 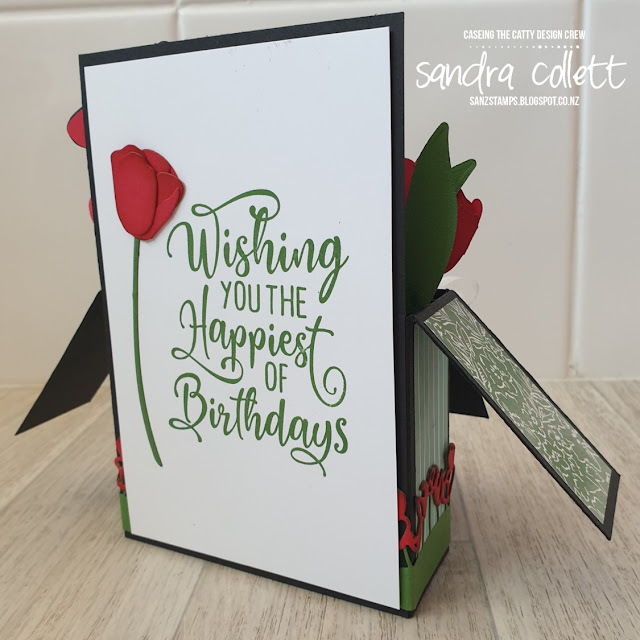 It's not needed until Wednesday so the pressure is off a little now, and it won't be being posted, so I just need to make the envelope. Hope my mother-in-law appreciates the effort involved. I've adhered post it note strips to the back of the numbers, so at a later date she can remove the numbers and have an everlasting bouquet for her dresser.
We would love to see you CASE a Die Project and add it to our Facebook page using the link over to the right before next Sunday evening.
Next on the hop we have Michelle and her fabulous Mother's Day card: 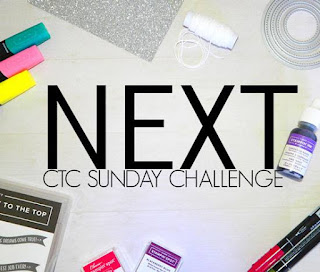 CASEing the Catty Join the Challenge